It was a wonderful All Nations Green Corn Festival. Thank you to all our volunteers, donors, sponsors and those who came out to support us. It gets better every year! But now back to the reason Wolf Creek Museum exists. It is this archeology site that was discovered in 1970.  A map of an entire palisaded village. A village we are building back.  At the end of this blog pictures of the rebuild currently.

Folks may ask why would it be important today to rebuild a replica of a village that existed 500 years ago? First of all this is a village that existed in Appalachia! In many historic records and on many maps this area is listed as "the unknown tribes" or only referred to as "hunting grounds" for the Native Americans and early colonists. Our question is why would anyone want to settle and live where people were not thought to live before Europeans arrived?  Archeology sites such as ours tell us a different story, a story of a people who called this home, the story of the "unknown tribes" of Appalachia.  A people cannot plan for a future, if they don't know their past.

The village is teaching us quite a few lessons. We are placing posts in the ground to mimic the archeology map. We are reproducing all the storage and fire pits and it is showing us another way these folks could have lived in this valley long before anyone knew they once existed. Granted we are using modern techniques and modern materials (mostly to survive the rebuild in a flood plain that require adjustments to hide later), but the integrity of what it was like to live in such a village and the means by which they could have used to support people can and will still be seen. 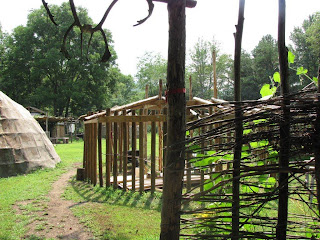 Structure known as Old Gardeners through the front gate being built.
It was thought this village could have been home to as many as 100 people. There are times we wish we had that many to build and maintain it today. Alas we have a dedicated crew of 7 and if the village is to rise from the ground we will need some help. We are asking for a few volunteers to join us the weekend of August 20th for a VILLAGE RAISING (much like a barn raising) to get the first five structures in working order before school groups. We are looking for folks with strong backs and construction skills. We have 6 signed on and would like to have at least 6 more. Volunteers can camp on site at the museum and we will feed them. It begins Friday August 20th and ends Sunday August 22. If you are interested please call the museum at 276-688-3438 and ask for Denise Smith. Or email her at dsmith@indianvillage.org

The structure wall posts are already in place. We are looking for volunteers to help with the roof of each structure and the inside shelving and replication of the pits. These are pictures of the structures yet to be completed. The Old Gardeners Structure now has it's base roof in place as of this week. But there is much more work to be accomplished.

This is stage one of 3. If you would like to donate food, tools, (we can use another generator, YES we are using modern tools for an ancient village, 7 people all the help they can get!)  materials to the project please contact the museum. Or if you would like to make a monetary donation please mail your donations to Wolf Creek Indian Village & Museum, 6394 N Scenic HWY, Bastian, VA 24314 stating Village on your donation. All donations are appreciated!! Thanks 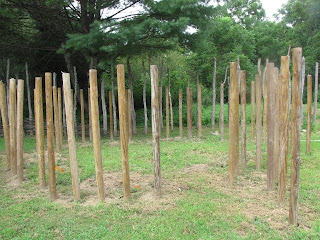 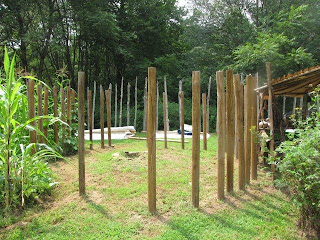 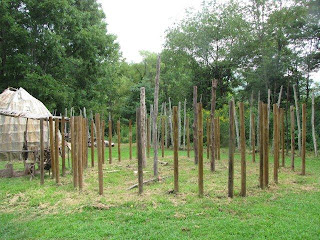 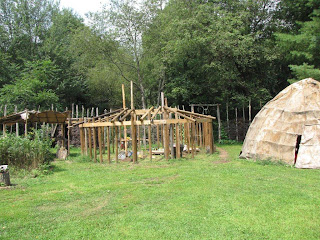 Structure Known as Old Gardeners getting a roof. 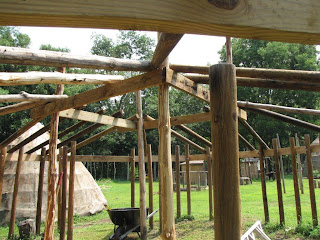 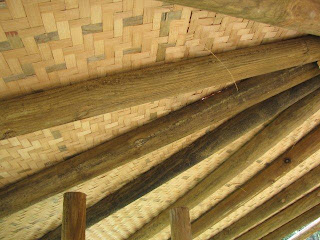 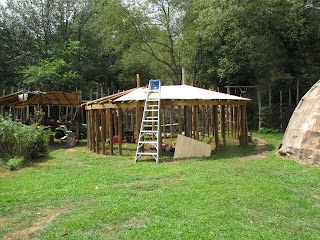 The Lodge and it's New Eastern Door way 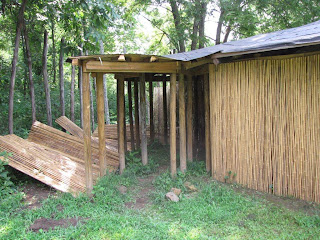 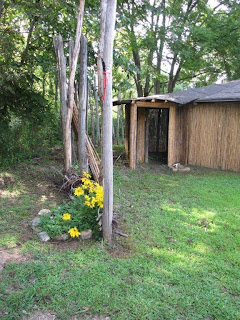 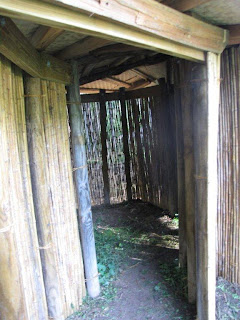 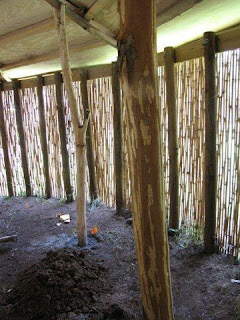 Inside Lodge awaiting benches and shelving and matting
PS I was asked why the roofing is like a regular roof on the lodge. Well the Flexible bark, though it looks like bark is "flexible", not stiff like regular bark and needs that support. You won't see the modern materials when the coverings are completed and we are finished.
Posted by Wolf Creek Indian Village at 11:56 PM