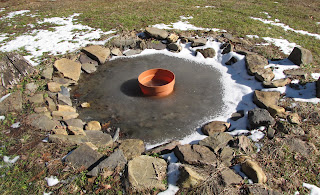 The small pond at Wolf Creek Indian Village & Museum was built by former employee and now volunteer Eddie Atwell.  It was a way to take advantage of a low lying, sort of marshy area, in the landscaped grounds and place a feature that visitors could enjoy. It became a wishing well. Visitors began tossing coins in it and making wishes.  Little did we know how much it appeared to affect people. Time and time again visitors who had tossed a coin, made a wish, kept coming back to tell us over and over that their wish has come true.

One we remember well was a young couple who made Wolf Creek Indian Village their first date. On the way out to the parking lot they both stopped, tossed a coin and made a wish at the pond to find their special someone.  (With hopes that maybe it would be each other.) A year later the young man came in to set up a special surprise. The following Saturday he would bring the same girl who was now his longtime girlfriend back to Wolf Creek Museum, the site of their first date, and ask her to marry him.

We set up the engagement ring in the Gift Shop in a jewelry case with the question of "Will you marry me?" Thank goodness the answer was yes.

Other stories have came through such as asking for answers for troubles and health for themselves or family members by tossing a coin making a wish. Visitors returned to tell us their wishes came true. Now we can't verify any of this.  It is just what visitors tell us. Maybe it is because it is just their want to believe or maybe it is that Wolf Creek Museum is a special place.  What ever it is we want to save the wishing well.

But we have had problems with the wishing pond.  We are on the fourth water pump and the coins tossed oxidize making them not much appreciated when we we clean the pond to gather them and put them in bank rolls. They also put metal chemicals in the water. Not very healthy for the tadpoles that appear every year.  With something that has been appreciated by visitors so many times to do away with it just doesn't seem right.

This year, Eddie Atwell has pledge to sponsor a new wishing well in honor of his family. Justin Miller, a master stone mason has offered to donate his skills to build a wishing well safe for tadpoles and still with the ability to possibly grant wishes for those that believe in tossing a coin and making wishes.

To make this happen in the next month or so what is needed is a source of our native field stone at least 3 to 5 inches thick to add to the stone we will use from the old pond.  Do we have anyone out there that has a source of field stone maybe piled up in their farmland fields that you would like to contribute to this project?  Please call the museum at 276-688-3438 or email us at info@indianvillage.org.
Posted by Wolf Creek Indian Village at 5:56 PM